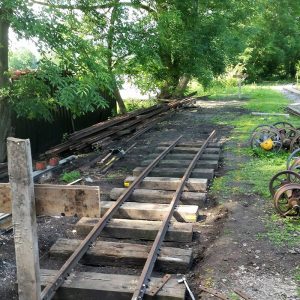 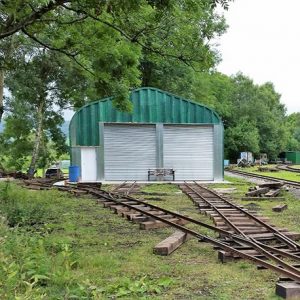 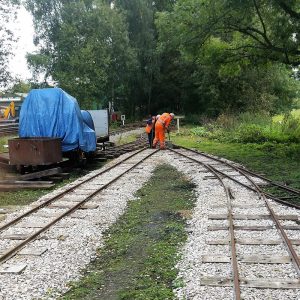 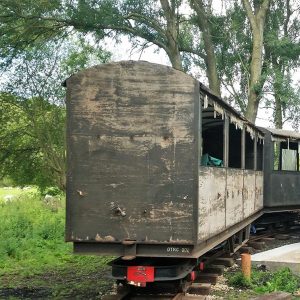 The Society has established a base at Peak Rail’s Rowsley South site and a shed has been erected to house its various collection of railway vehicles and artefacts.

Future development plans are to rebuild and create a passenger carrying narrow gauge line on the site aimed at re-creating the atmosphere of the original Ashover Light Railway which ran between Clay Cross and Ashover. Another project will be to construct the Where The Rainbow Ends Café dating back from 1926 which is already stored away from site.

Further information about the ALRS can be found on their website at www.alrs.org.uk.

Visitors to Rowsley South Station might be surprised to learn that there is a second, much smaller railway, also occupying part of the vast site; a narrow-gauge line operated by the Ashover Light Railway Society.

Ashover, some 51/2 miles from Rowsley, was once the terminus of a 2ft gauge line built by the Clay Cross Company to transport minerals from there to its works in the town of Clay Cross. Although built very much to be a no-frills industrial workhorse, the railway did, particularly in its early days, also run passenger services. Indeed it is particularly remembered for the Bank Holiday excursion trains which took the works employees out into the countryside in the 1920s and 1930s, as well as for the ‘Where the Rainbow Ends’ café which the company built to serve refreshments, and to hold dinner dances and other social events. 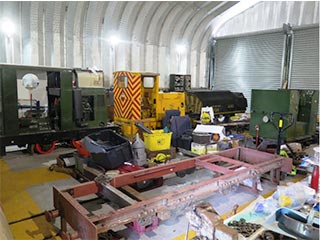 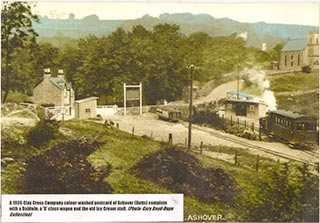 Ashover Butts in its Hey-Day

Following the line’s closure in 1950 the locomotives, most of the wagons, and the track was scrapped whilst the land on which the railway had been laid was sold off piecemeal to adjacent landowners. In the 1960’s Ogston reservoir flooded a part of the Amber valley through which the railway had once run, and whilst hopes that it might be wholly restored one day thus naturally diminished, it is still possible that one day a section might be resurrected.

Meanwhile, though, the Ashover Light Railway Society are keen to keep alive the memory of the old railway and they were delighted to be given the opportunity by Peak Rail to create an Ashover tribute line on their site.

Whilst still in the early stages the group have, over the last six years, built a workshop completely from scratch, and have restored, or are in the process of restoring a number of narrow gauge wagons, skips, and locomotives (including two totally unique ones), and have laid some 650 yards of running track and sidings, as the schematic drawing below.

All visitors to the Peak Rail site are already welcome to walk across the level crossing and down the track before heading left along the caravan field to view our facilities when if any of our volunteers are present they will be happy to show them what we are up to, and tell of our plans for the future.

We are now almost at the point where we can get our running line Independently Safety Verified to allow passenger running, and later this Spring we expect to be able to offer limited rides on our little battery electric loco. We intend to run these from a mounting platform which will be built near to the picnic area, so as to attract families with children, and by the late summer we hope to improve things by having a wagon adapted for carrying up to six passengers being hauled by a Ruston diesel locomotive. 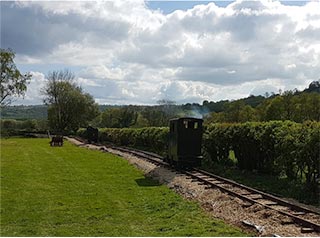 Thereafter how far we go will depend largely on discussions with Peak Rail to ensure our aspirations align with their own plans. The picnic and play area itself could easily accommodate a turning triangle layout and simple station shelter, thus effectively reproducing the Ashover scene, and we still have the original ‘Where the Rainbow Ends’ café, dismantled and in storage, which we would hope, one day, could be re-erected in a prime position overlooking that picnic area, just as it did at Ashover Butts Pastures. This we envisage could house a museum and display area, to tell the fascinating history of the line, as well as serving as a place for shelter, rest, and refreshments. Even further in the future it is not impossible, should Peak Rail wish it, to envisage extending the running line southwards beyond, and behind, the main Peak Rail and Shunters Trust workshops, to possibly create a means of transporting would-be visitors to see them.

If anyone has ever considered volunteering, but has been put off by the sheer size, weight, and complexity of everything on Peak Rail’s standard gauge, why not come and have a look at us. Everything on the narrow-gauge is of a much more manageable scale, and much simpler to operate!

PLEASE NOTE that ALL trains depart from either Rowsley South or Matlock Platform 2 Stations ONLY.

Please refer to our “Back in Steam” page for more information